Had a small get together at my place last weekend, and had the game set up and playable during that time, with a camera on it. I recorded about 12 hours of video, although some of that time it probably wasn't being played... Twice I had the solder break on the flipper wiring to the resistors. I'll need to think of a better way to mount those. Currently they're just hanging awkwardly from the coils from when I first attached them for testing, which obviously is bad. Once the flippers just died randomly, and came back next ball. Not sure if that was a tilt or something correct that the player didn't notice, or if something malfunctioned. Will have to track it down in the recording and see. One time the ramp switch didn't register, which has been a recurring issue. I've got it tweaked 'just right' so it's 99% good, but I need to figure out a better solution eventually. This wouldn't be too big of an issue, except the lock post in the ramp won't let the ball back down, since it doesn't know it's there. I had two other stuck balls, both times they were caught by the shooter lane diverter, pressed against the back of the drop target next to it. Both of these issues will at least be alleviated by a ball search, which I'd never gotten around to coding before. So the next day I added one in. Not too complicated... I shouldn't have put that off so long. Besides from that I had no reported issues, although I'm sure a lot of that was people just not knowing how the game is supposed to work.

Another thing that's been on the todo list for a long time: adjustable GI. When I originally got the led strips, I got some super bright 12V ones since I was worried about how well they'd work. Although the center of the playfield is still a bit dark if you turn off all the other lights in the room, overall it's more playable than some games, but in a lit room they're a bit much. Usually more light would always be better, but they tend to make it harder to see some of the mini displays, especially the ones along the edges. I considered trying to hook them up to a solenoid driver, and manually PWM them to get them to dim, and also give me manual control of them in the code (although I don't really know when I'd use that), but that sounded like it could be a bit of a pain (and who knows if my mosfets can handle that much current), so instead I ordered a cheap 12V LED dimmer off eBay. 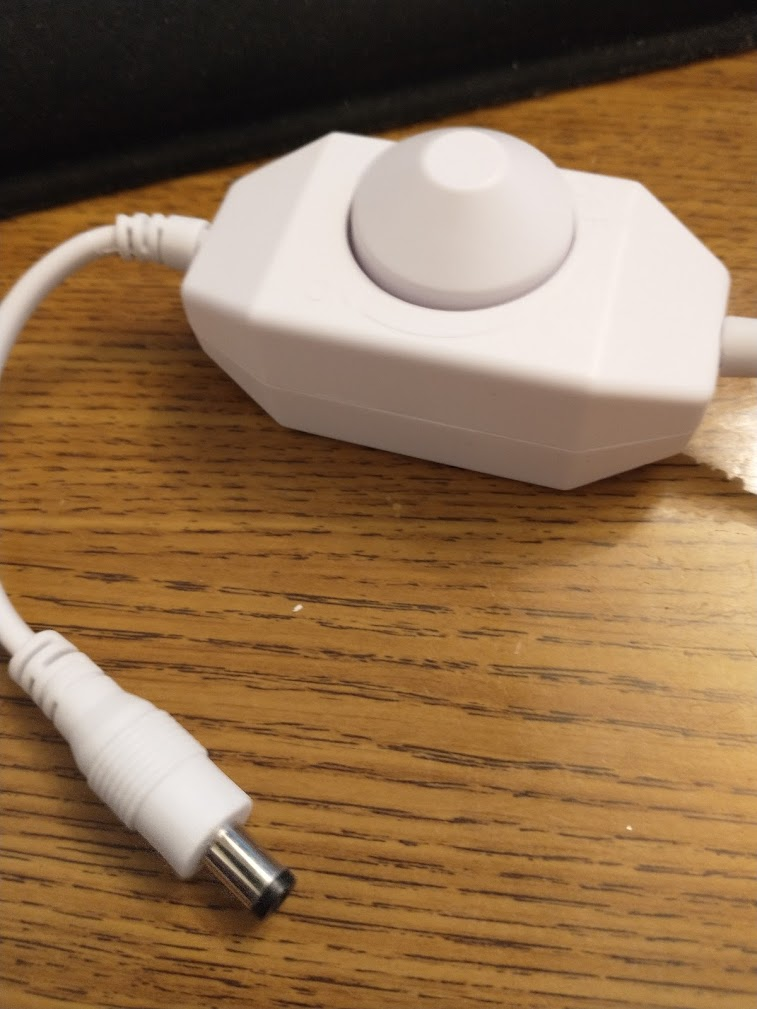 It had these annoying bullet plugs that a lot of electronics have, but I've never had a good way to deal with. I was about to go about my usual process of cutting off the plugs, then buzzing out the wires to figure out which is which, and heat shrinking some new wires onto it, when I had a light-bulb moment: what if I just opened it up? Sure enough, two phillips screws on the back were all that was needed to open the case and see four nicely color coded wires soldered to spots on the board 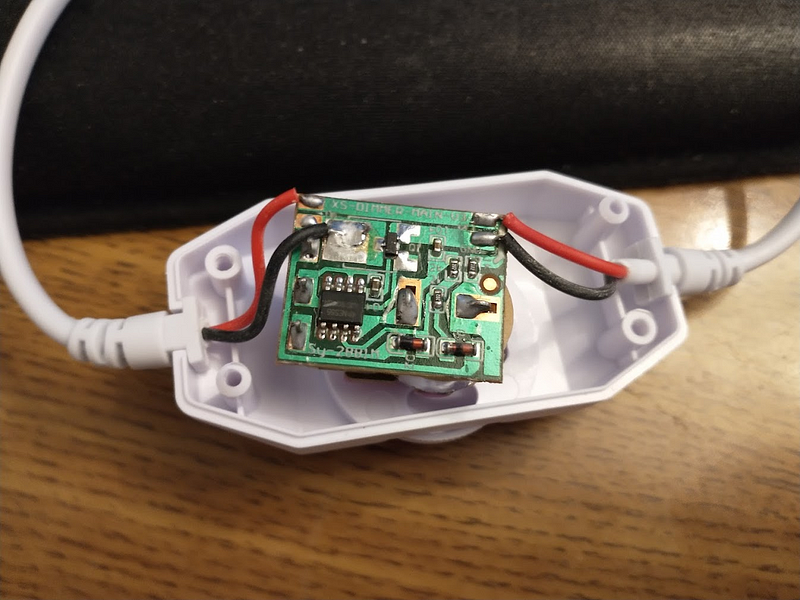 A little bit of soldering, and I now had my own wiring and connectors attached 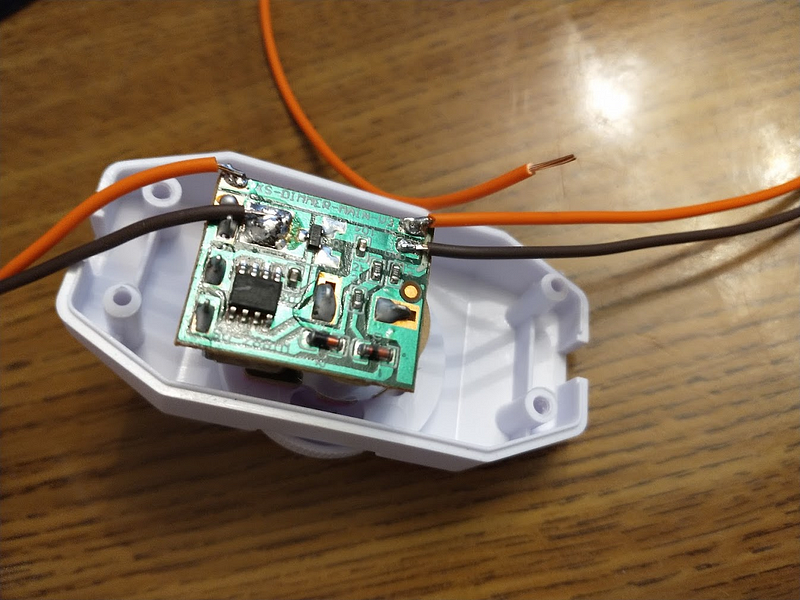 The dimmer works great, and I now have fine tuned control of the brightness of the GI (and can even turn it off if needed). Still need to find some way to mount this in the cab, but that'll be an issue for later on. At some point before the weather gets too cold I'd like to take the game apart, clean the inside of the cab and put in some final cable management for everything, then sand and stencil the cab with some playing cards.

While I was in the game I also took the opportunity to wire up a few more inserts: 3 in the center of the playfield to show your progress towards a potential wizard mode, and two more in the mini playfield. I stopped using the star rollovers I had installed there to sense the ball a while ago when I made the new diverter, and luckily I was able to find some white inserts that were the same diameter as the star rollovers to replace them with, so now I finally removed the switches and wiring underneath too. 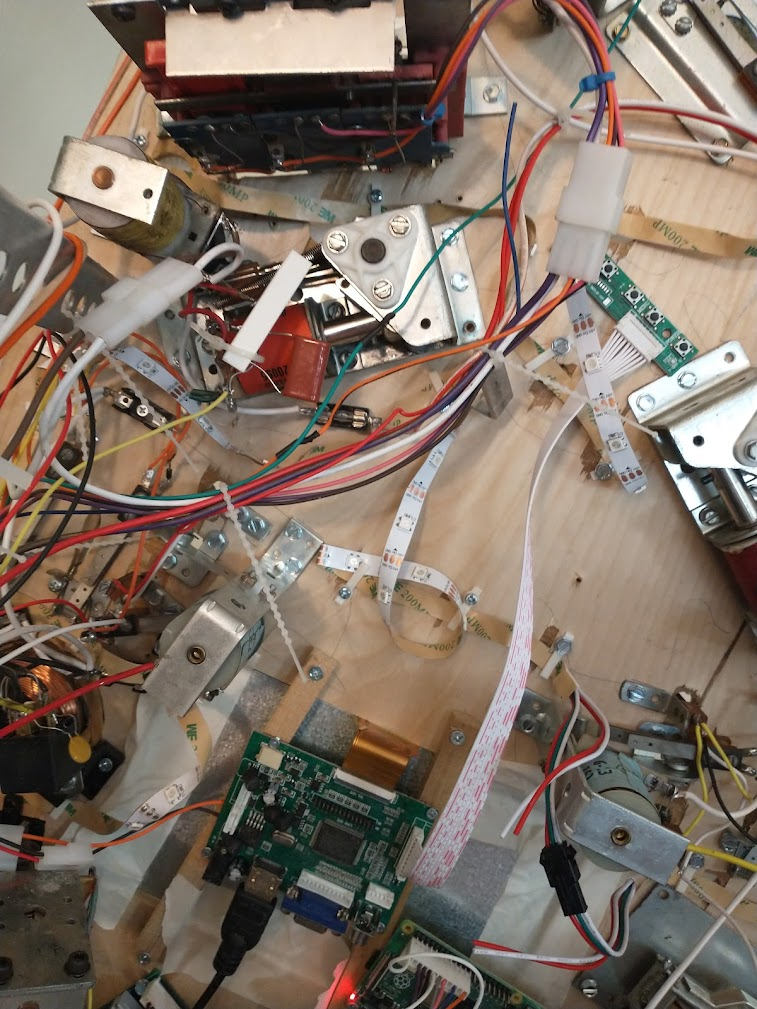