Reassembled and dropped it in the cab again for more testing. 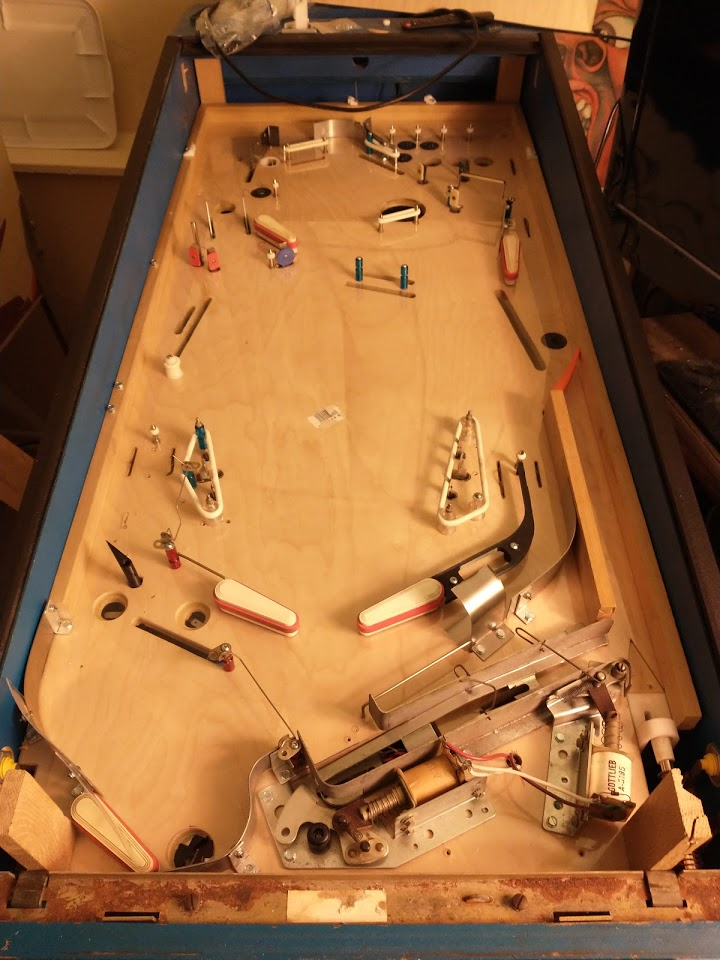 Everything seemed to work fine. No mechs were sticking, no raising of the plastic anywhere. I left it sitting for a while with the transformer+electronics on in case that would trap any heat underneath, but nothing happened. I'm still quite suspicious, but I can't really think of any more testing I can do at this point, and the playfield does look so nice and shiny....

So I took the playfield back out, and disassembled the whole thing again. I'm getting very fast at this, but it's still a pain. One thing I'd try differently next time is the side rails. Currently they're under the plastic, but I think it'd be fine to have the plastic 1mm away from them. This'd save at least a quarter of all the screws I need to remove when taking the plastic off, and prevent the playfield from having time to sag while the rails are removed. Within a few hours of removing them there's a noticeable 1/4" dip in the middle of the playfield, which is more than I'd have expected, especially with all the drop target banks already removed... I assume my playfield wood just isn't as sturdy as what manufacturers use, but nothing I can do about that

With the plastic removed and everything stripped off, I have some updates to do that I've been putting off:
- the right controlled gate for the top lanes needs to be moved about 1/2" to the left to prevent ball hangups
- the right-most upper lane needs a new rollover drilled in line with the others, since previously it only had a 'bottom' row switch
- need to add lane guides to the upper lanes so the ball doesn't fall the wrong way
- the target under the upper left flipper needs some tweaking. The hole isn't big enough to fit it through right now, so I need to extend it, and I want to reposition the guide wire below it to give a better feed
- I've removed the upper left target (it was sort of under the ramp above the upper left flipper) since it can't be hit due to the pop bumper being replaced with a rubber (it wasn't really hittable before either), so now I can make a new guide going from the upper eject hole to the upper left flipper that doesn't have a gap in it for the target, which will hopefully improve that feed.
- widen a few holes and slots slightly since some mechs would occasionally bind a bit on the edges

Once that's out of the way, I'll move on to the fun part: cutting a 10" hole in the middle of the playfield for the LCD screen. No chances to mess up horribly here, nope...
And then I can cut another 2.5" hole for the upper magnet and finally get that installed again!