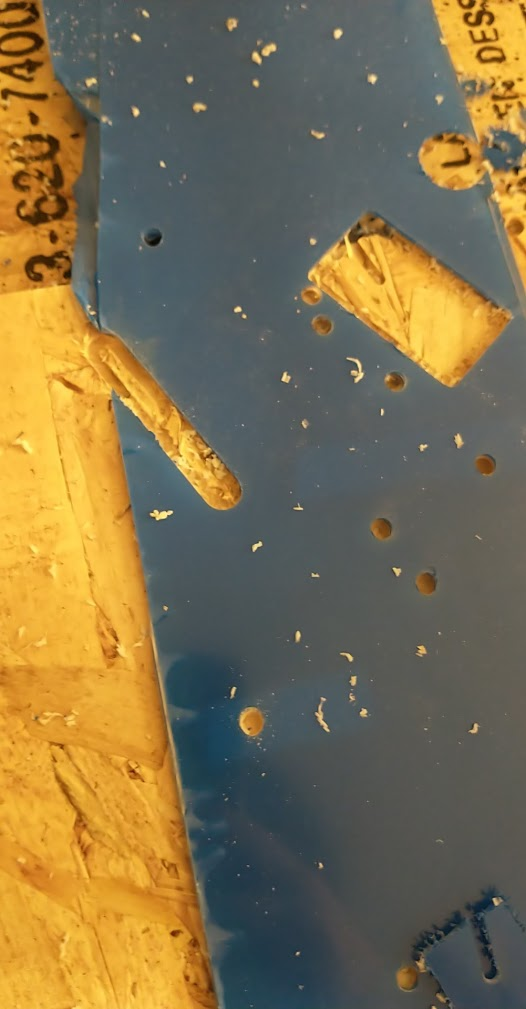 It turned out fine, no obvious issues. 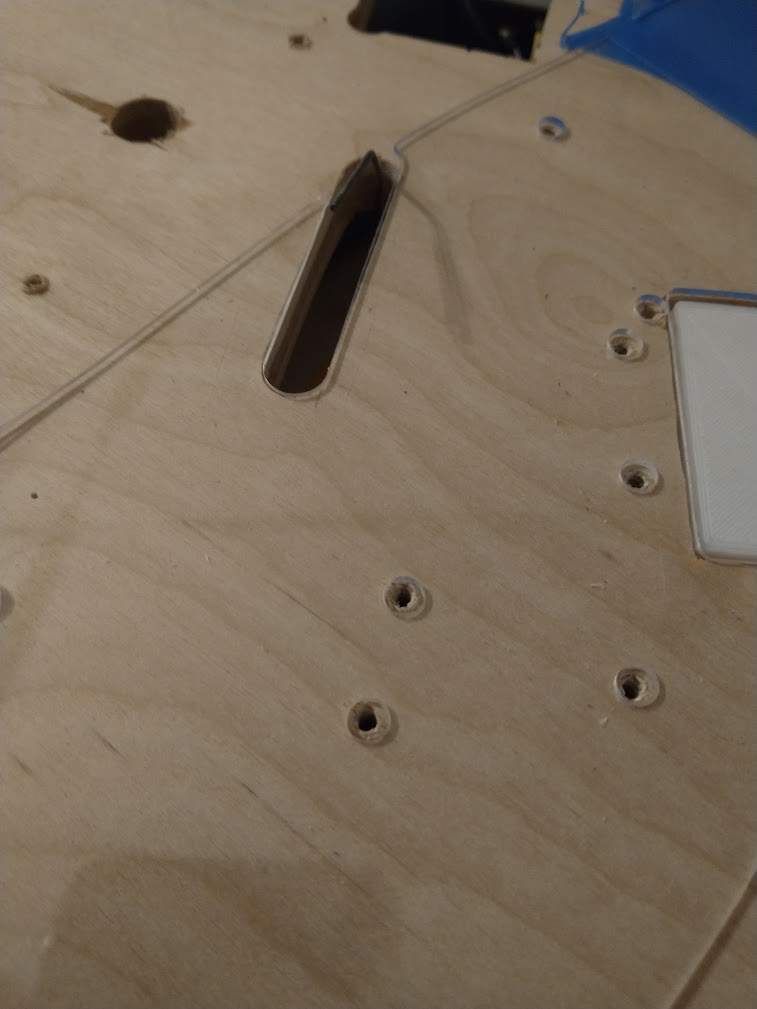 so I went and did the whole thing. I took one of my rough manual cuts, and stuck it down with a bunch of double sided tape. In retrospect I should have used thinner tape, as during the cut I could see the plastic flexing downward before the bit broke through, but it doesn't seem to have caused any issues with the cut. 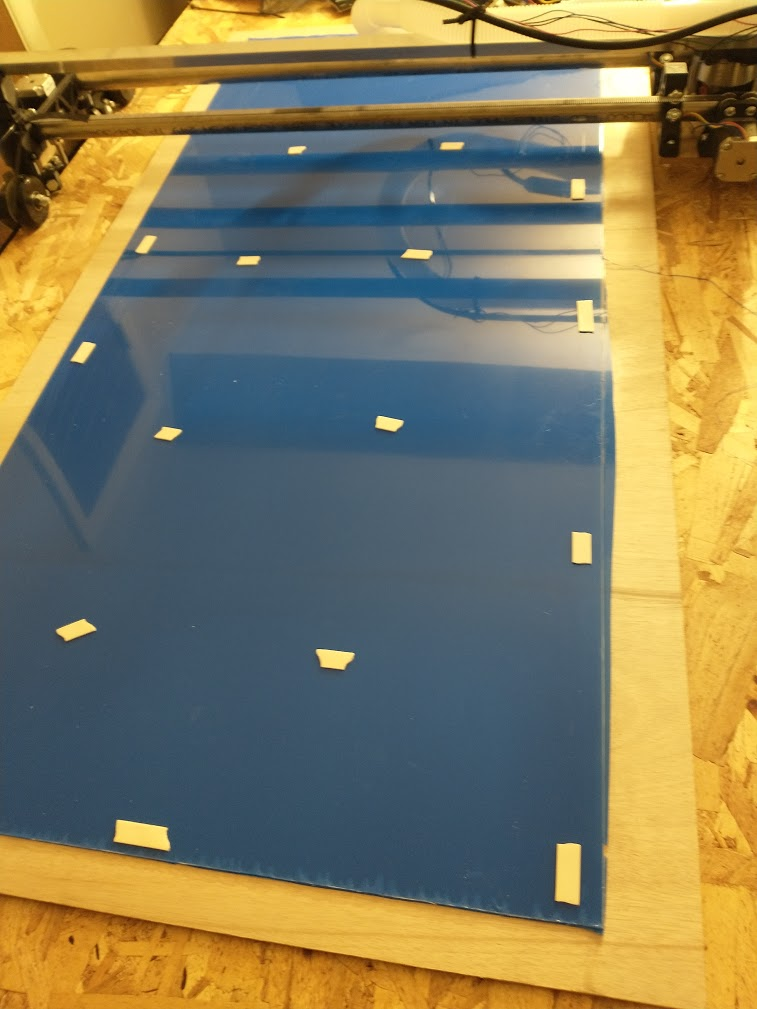 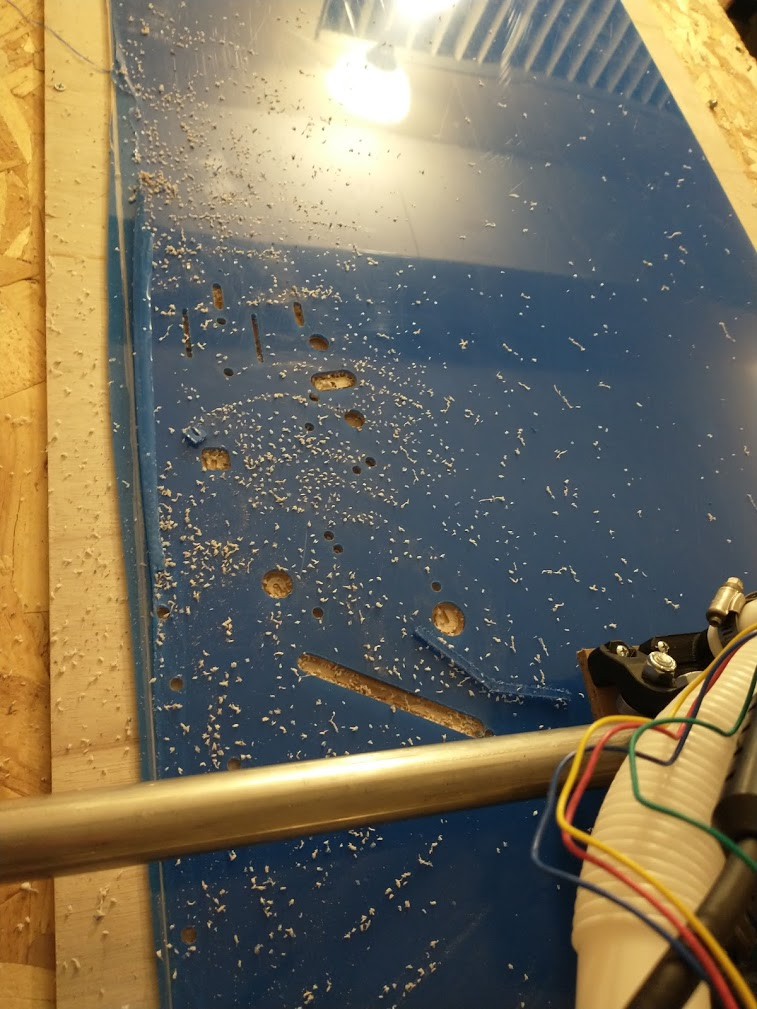 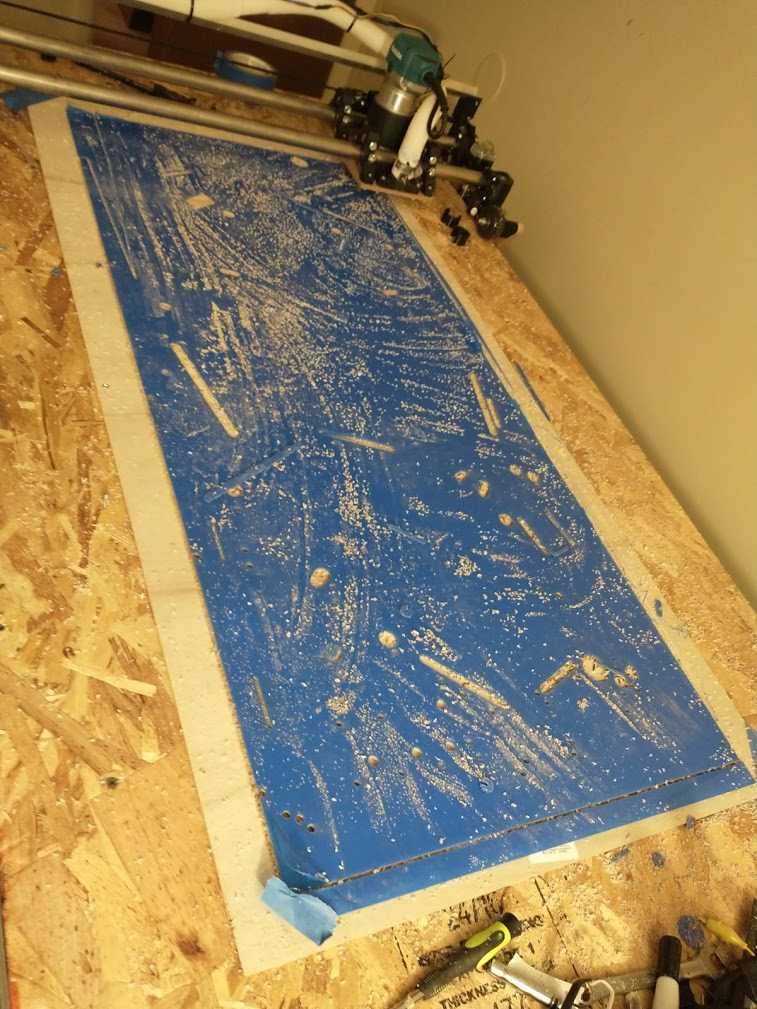 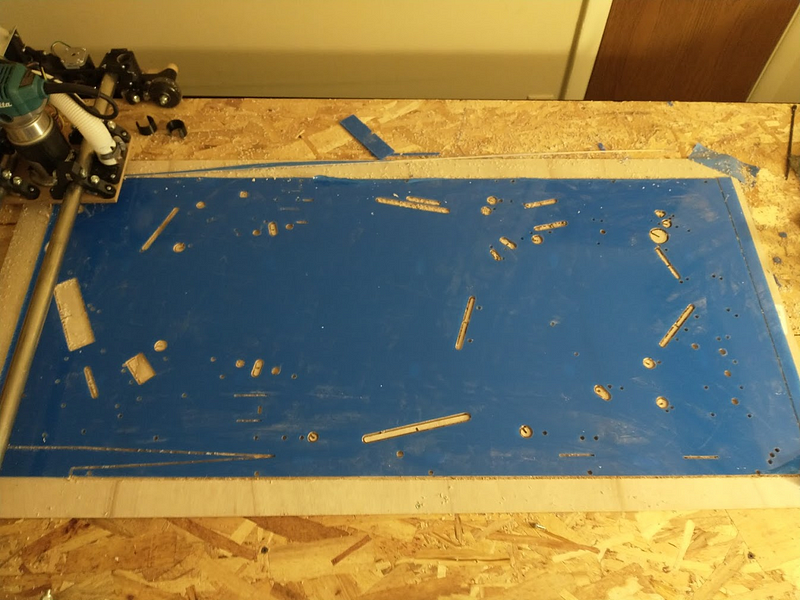 My first time running a real job on the CNC, probably took about 40 minutes. Plastic seems to have come out fine, and it at least fits on the playfield. 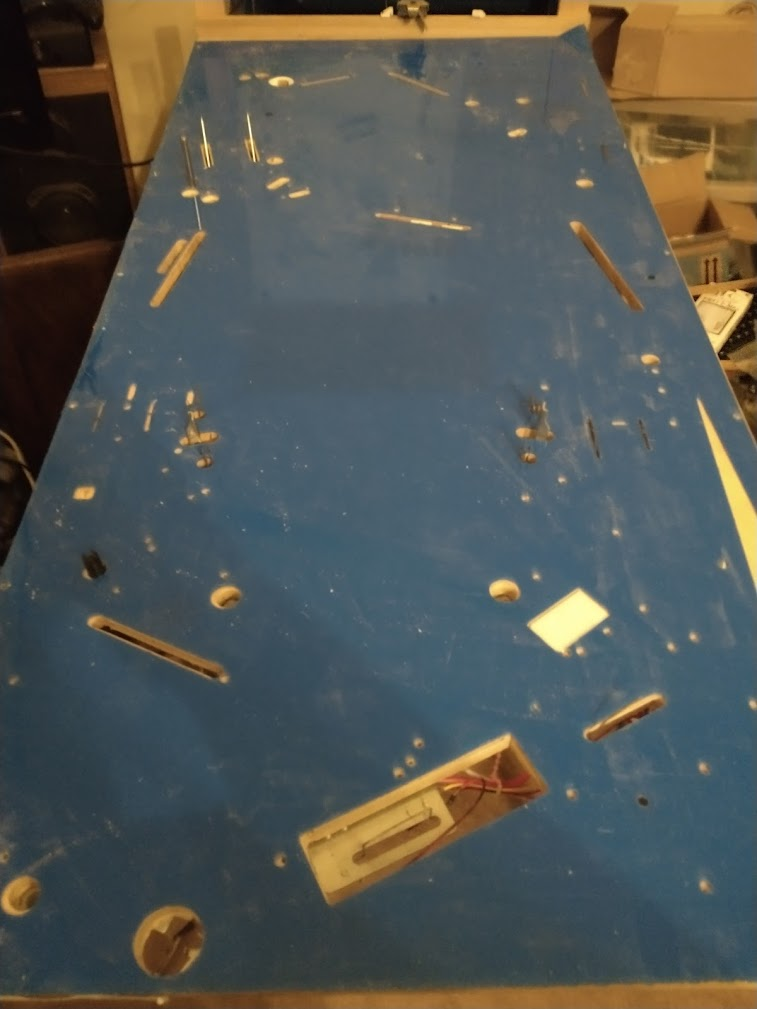 Most of the holes are off center, but not outside the margin of error (I made every hole bigger than needed). 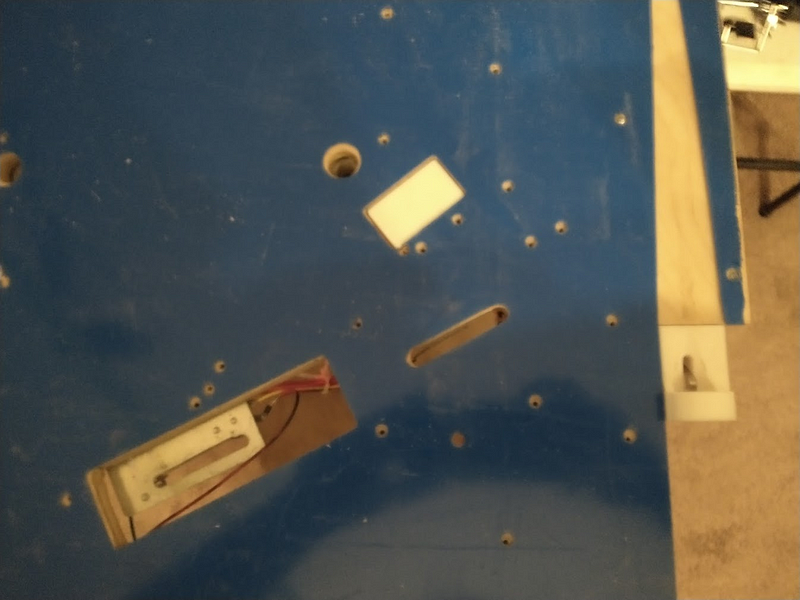 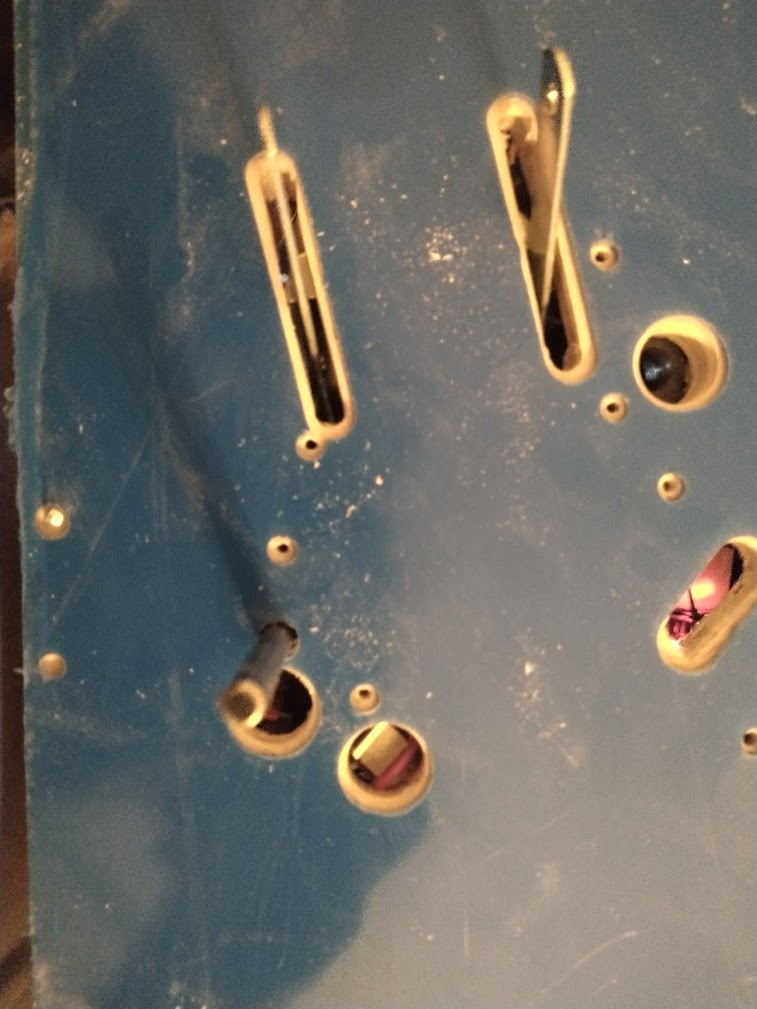 There's a few places that need some correction, so I need to figure out how to do that. Aligning the plastic perfectly was a big pain, I don't think I could reliably get it matched up again. But I want to avoid doing stuff 'by hand' for risk of cracking the plastic. Maybe I'll need to use the router manually? Or try to run the CNC with manual control. Before I bother with any of that though, I should probably secure this down again and do some more heat tests.

I went in multiple times to try to do the corrections to the layout, but something just wasn't making sense. The corrections weren't all in the same direction, but different parts of the playfield tended to all need correcting in the same direction, and half the time that direction was opposite of how i'd already corrected those points before. In addition, the way I lined up the plastic so that it lined up with holes the closest resulted in it not being parallel with the edges, which didn't make sense either. When I lined it up with the edges of the playfield, right to the corners (where I know it should all match up), none of the holes lined up at all. So I stopped working on that until I could figure out what was going on. I measured various parts of the plastic and the wood playfield, and checked them against my CAD drawings, and they were all accurate. Then I got a t-square out to check if maybe my playfield somehow wasn't square. Nope, playfield was square. But the plastic wasn't! It had a 3/8" skew to it along its entire length. There must have been something wrong with the setup of the CNC causing it to list to the right as it moved up the playfield, so I'll need to figure that out. Never noticed in my test cuts since all of them were smaller. So that plastic is a loss for any real work. But knowing that it's wrong, I don't have to worry about fixing it the right way. So I just got out a router and adjusted all the holes by hand to line up enough. I'll reassemble the playfield on this bad plastic for now to test out the material.